Sorry America — at least outside of New England — but the team you love to hate is headed back to the Super Bowl.

Sure, there are negatives to point out with these Patriots. They haven’t looked much more than mediocre on the road. Their defense is vulnerable, especially against dynamic passers, and Kansas City certainly has one of those in Patrick Mahomes.

New England’s coaching staff tends to take away an opponent’s biggest threat. Who is that with the Chiefs, though? Mahomes has Tyreek Hill, Travis Kelce and Sammy Watkins as dangerous targets. He has a running game that hasn’t really missed Kareem Hunt since he was released.

Oh yeah, Tom Brady also is 41. At times, he’s looked it this season.

And there are so many positives to list, especially when the Patriots (12-5) get this far. Such as being to eight Super Bowls with Brady at quarterback, winning five. Such as their superb demolition of the Chargers, an opponent many thought was the most balanced team in the postseason; though the Chargers’ defense looked from the outset as if it wanted no part of frigid Foxborough. 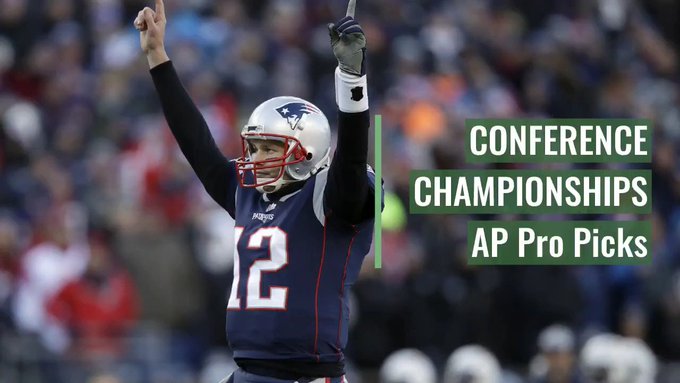 Pro Football Writer @wilner88 make his predictions for the conference championships. Watch for the picks and read the story: http://apne.ws/jg6itqb

Oh yeah, Brady is 41. He’s seen pretty much everything, and will particularly like the looks of the spotty pass coverage Kansas City (13-4) provides.

The entire environment seems to work for New England.

“Yeah, I think this team thrives on it,” receiver Phillip Dorsett says. “Obviously, there’s no elephant in the room, we’re 3-5 on the road and everybody is going to criticize us for that. We’ve got our backs against the wall and we’ve just got to go out there and play our best game. That’s the only thing that really matters.”

It also matters that Chiefs coach Andy Reid rarely outsmarts the Patriots. Indeed, Reid’s only Super Bowl trip was spoiled by New England when it beat Reid’s Eagles for the 2004 title. Reid is 2-6 vs. the Patriots, and lost 43-40 on Oct. 14 at Gillette Stadium.

The Chiefs are 3-point favorites, which accounts for the home-field edge. Except in the upcoming arctic conditions, and with the pedigree of the Patriots, this is a matchup Kansas City won’t win.

A 45-35 shootout victory for Drew Brees and the Saints on Nov. 4 came in the Superdome. These two have a return matchup Sunday to get to the Super Bowl, and with all their firepower, this one could come down to one factor: experience.

That edge clearly falls to the hosts. New Orleans (14-3) has been a postseason regular since coach Sean Payton and Brees hooked up in 2006. This is the Saints’ third NFC championship appearance — a loss at Chicago in January 2007, an overtime win over Minnesota at home three years later. The Saints won the Super Bowl that season, as well.

Los Angeles (14-3) had the only unanimous member of the All-Pro team, defensive tackle Aaron Donald. And the Saints lost key DT Sheldon Rankins to a torn Achilles tendon last weekend. Still, this side of the ball looks like a wash.

The site of this game is more critical than in the AFC. The way the Superdome rocks can be disruptive to opponents, and uplifting to the homies. Just look at the Saints’ win against defending champion Philadelphia last Sunday.

So give us Brees’ calmness and creativity over Jared Goff’s relative newness.

ABOUT THE OPEN VIEW NEWS PORTAL